You know, I really have no idea where this last twelve months have gone. I feel that I have just blinked and WHOOOSH, it's mid-December!!!

So much has happened in 2018 and it has certainly been a year of unexpected change and altered directions in many of the different parts of my life.

The "day job" has been quite eventful, all in a good way. I've moved to a different aspect of the work and  I have to say that I genuinely love it. I am fortunate as I wake each morning with no feeling of dread for the day ahead, my colleagues are generally decent people and the work is both fascinating and fulfilling. The shift to a different aspect of the job will, hopefully, lead me to a professional qualification and a skill set that is quite unique and definitely unusual, but the level of satisfaction will, I already know, be high. This change to the work side of life has had a pronounced effect on other areas of my existence on this blue marble, mainly the photography and music sides - in January of this year, I had a pathway set out that would have seen me upping my game on both these things, particularly photography. However, both the scale of my work and the new directions that were put my way enabled me to review everything long-term, and it was very clear that the opportunity to study for a work-related qualification was too good opportunity to pass by, plus it is something that I have been wanting to do foe quite some time.

Okay, so basically, work has really dominated my plans this year, but that doesn't mean I haven't been able or willing to do some of the photo/music things. No. Back in June I released a collection of left-field electronic pieces in n album called "Loom of Light". It's not done badly considering it's rather limited appeal and I'm more than happy with the responses to it. I've also had one or two trips out with the cameras, but I do feel that maybe my concert photography is now pretty much dormant. I'm okay with that.

My little GTK2 Studio has seen some pretty significant change as well. I've got hardware again. Actually, I've got quite a bit of hardware. And that's meant changes to the studio in terms of audio interfaces, organisation of the studio and actual set up. Here's a list of the new gear now sitting in my little room:

I'll do a post that goes into a little more detail about the new gear soon, along with some photos. Now, I've always been a big advocate of "in the box" recording and production, and that hasn't changed. I bought the hardware as an electronic music system that I can go to when I'm having down time from work - my job is very intense both physically and psychologically, therefore, when neither studying or working, I wanted something that I could just go to and make a lot of different noises with to help me relax and shift my focus away from what I do. And make different noises this lot certainly can - it's been quite fun twiddling knobs and shifting sliders.

Alongside this I've been working on a new version of my first album "The Garden", which was released under the name Geigertek through U.K. instrumental music label AD Music. The publishing contract reached it's ten year point back in August and I took the option to take back the rights to the album as I wanted to several things with the music. The biggest thing has been to completely re-record it. Using data files and audio stems that I still had (and didn't lose when a hard drive died on me a year or two ago!!!) , I reconstructed the tracks in Reaper 5 and set about applying new synths and effects to bring the album up to date and give it a little more weight and depth. I'm hoping to release the album, which has been renamed as "The Garden Revisited" (I'm nothing if not original huh?), very soon as a download on my Bandcamp microsite.

Along with "The Garden", I have also been given back the rights to two other releases, "The Timeless Mind" and "Endless Night E.P." as well. "The Timeless Mind" is also going to have the "redux" treatment (might even use some of the new hardware!!!) and tracks from "Endless Night E.P." will see new life on "The Splendour Cascade" project (four out of the six tracks were originally written during the same time period as the other proposed tracks for this album).

Hopefully, it won't be another five months before my next bloggy-posty-thingy :-) 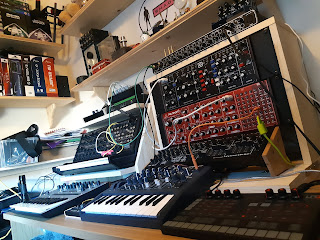 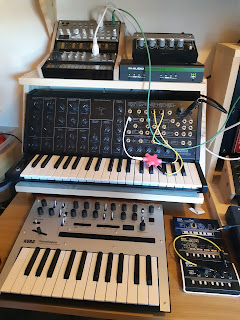