I've been beavering away for a few days (the Canon scanner still not bloody arrived by the way) and I have gathered so much information already, with tons more on the way.

A chance glance at another person's family tree made me inquire a little further regarding the relationships between the people I have on my tree and the consequence is the discovery of SIXTEEN children born to my great-grandparents between 1910 and 1935, and, this is the real kicker, the answer to the mystery of why my father and his brother were so, as I was told, vehemently against the family history of their family being looked at!!!

It's better than Eastenders!!!

Lots of note writing, lots of bookmarking, lots of TreeView updating and lots of death/birth certificates ordered. It's getting busy!!!

So, I've also spent some time sorting out my workspace. 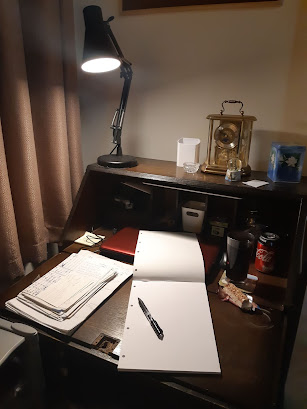 Initially, I thought it would a good idea to enable my three computers (1 x PC and 2 x laptops) to access the TreeView software - this didn't prove too successful in that I basically got confused. I'm getting old, I'm slowly coming round to the idea. Plus, I started to find I had papers and books and the like scattered all over the house. Now, my good lady is supportive and tolerant, but she's not that into the genealogy thing (yet!!!) and it's about playing fair. Ultimately, I decided that Genealogy HQ would be the old battered bureau in the dining room. I dragged the plastic drawer unit through there (the wheels fell off with the weight of the stuff in the drawers) and brought down my Canon all-in-one- printer/scanner/copier/fax/tea-maker/dishwasher......sorry, you get the idea. Oh, the Canon printy thing is also wi-fi enabled - well cool - so that means I can print from anywhere in the house from my PC (upstairs in my little recording studio - I'm also a recording musician), my Samsung smartphone and my Samsung Galaxy tablet.

I sat down with the first drawer of my mothers research papers and weeded out all her hand-written notes. She had a penchant for writing her thoughts, ideas and information on the backs of envelopes, calenders and scraps of paper. I had a quite a pile of seemingly jumbled scribings, actually there was nothing "seemingly" about it all, they were a jumbled heap of paper. So, I gathered them from the smallest scraps to the sheets of A4 and wrote everything on them onto fresh sheets of A4 paper, a new sheet for each note. That might seem a little wasteful as some notes were only a line or two, but separated from the whole, each note started to look more like a piece of the puzzle. There were a lot of things that were repeated several times, but I came to recognise this as my mothers thought patterns and ways of bringing forward ideas in her mind. That won't work in the slightest for me, but it worked for her and I could soon see how her information was taking shape - quite literally method in the madness. I have one drawer three-quarters done, the rest will be done over the next few days, in between my poking around Ancestry (.com) looking for anything related to my fathers family. The work on my mothers side of the family is very advanced and needs properly collating and presenting -this will be easy. 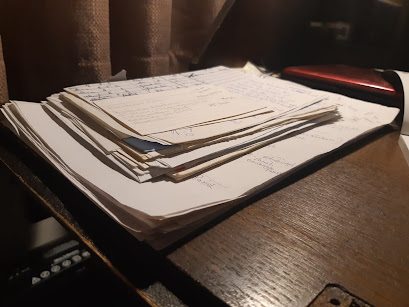 Anyway, things are looking a little more organised and that's a good feeling. I decided to cancel the order with eBuyer for the Canon scanner. Quite frankly they've pissed me off and I will never use them again as this was not the first time they've done this sort of thing. I reordered the scanner from Laptops Direct, opting for Next Day Deliver and............it's not here yet, I ordered it yesterday in the time they said for getting delivery today. No tracking to speak of and yes, I'm feeling a tad pissed off. Again. You know, I can't even buy the damn thing locally as nowhere has it in stock, including the likes of PC World (or Currys, whatever the hell they're calling themselves now), Argos and even Amazon can't deliver until Saturday at the earliest.

You may be getting the vibe that I don't do the "waiting" thing very well and there's a good reason for that.

I don't do the "waiting" thing very well.

In the meantime, I've been preparing research documents such as family group forms, research logs and source records. I've put together a couple of folders to take care of certificates that I print off from the Internet and get from the General Register Office - I said at the beginning that I do the paperless thing, and whilst I accept that I am going to need to use some paper documents, I will be going digital on everything else. And talking of digital, on the computer I have set up folders for images, the various families, documents and templates. I've created my own blank printable forms using Microsofts' Excel spreadsheet and set up the scanner on my Canon all-in-one to send its output to the Family History folder on my OneDrive.

With the information I have already gathered, I have started filling out the family group forms - what a great idea they are, so simple, so obvious and so very useful. These will present a picture of a single family unit, for example, the first form has my details along with those of my ex-wife and our two children, the second form has a shorter version of my details along with my parents and the next two family group forms will be for my parents and their parents and siblings. It simplifies the information and lets you see what each family looks like away from the family tree. 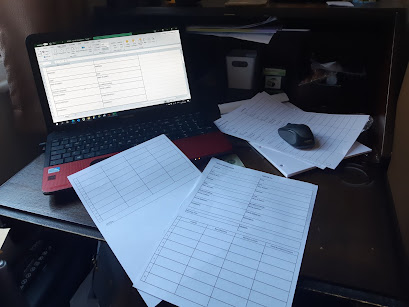 Amongst my fact-finding tour of Ancestry, I found out where the family grave containing my paternal great-grandmother and two of her daughters is, so earlier today I spoke with Kensall Green Cemetery in London and they very kindly (and quickly) sent me a map of the location of the grave within the cemetery. Hampstead Cemetery please take note, I had this information within an hour!!! I've also been tracking my father's family through North West London on Google Earth, so I will be taking something of a "field trip" (probably early next week) to London to visit the grave of my great-grandmother and great aunts as well as taking a drive around the places where the family lived through Kilburn, West Hampstead and Paddington. Being a photographer as well, I'll be taking the camera (yep, it's a Canon) along so I can get some decent images. Finding the grave might prove useful as headstones (assuming there is one!!!) can sometimes yield a lot of information - I remember many years ago when I accompanied my mother on a cemetery visit to London when she was researching her fathers' family, that we looked up two or three graves and gained a lot of knowledge from them, not least dates and names we hadn't come across.

Once again I've hit the 2am mark. I've got to start trying to stem this as I'm back to work in less than two weeks and not being 25 years old anymore, I struggle if I don't get sufficient night's sleep - this getting older business can be shit at times, not helped by the onset of arthritis in my knees and type 2 diabetes (which I really do need to manage better!!!).

Anyway, enough, I have to sleep now. 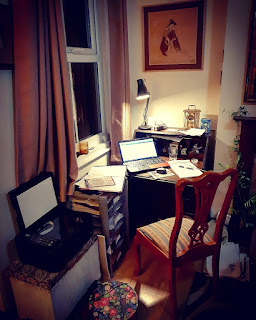