After a fair bit of deliberation, picture gazing and review reading, today I finally bit the bullet and bought a rather cool little gizmo at my local PMT called Faderport, made by U.S. music gear manufacturer PreSonus. 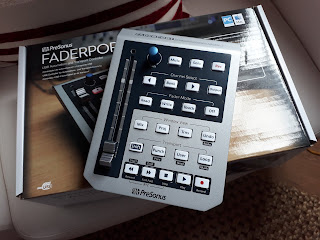 Did I say it was a rather cool little gizmo - I lied - it's a seriously cool piece of kit. I've had it for nigh on 4 hours and I completely love it already!!!

It's a MIDI control surface whose principle function is to control your DAW (Digital Audio Workstation), plain and simple. And I think that's why it is so good, it's plain and simple. Apart from 5 buttons out of 24, it's pretty much one function per button, with the added luxury of a motorised fader, which you will soon realise is one of life's necessities and wonder how the fuck you did without one!!!

Installation was simply plug and play - Windows 10 picked up and set up the Faderport before my log-on was complete, I use an SSD for my system drive and it's QUICK. As I use Reaper 5, I have access to the innumeral scripts that users concoct and share with the Reaper community, and I very quickly found a marvellous little hack that allows a little extra functionality from the fader pot and "shift" function.

All the standard transport controls are present - stop, play, record, rewind, fast-forward and loop, as well as basic channel controls such as mute, solo and record-arm. There are the usual controls for the fader being read, write and touch. You can also switch window views if you so desire with buttons for your mixer (very useful - I have a two monitor set up with the mixer full-screen on the second monitor), project and transport. Faderport also has a nice little undo/redo button (used with the shift button) and the ability add markers and move between them, again using the shift button. A "user" button is also provided, I haven't assigned it to anything yet, but I will!!! And you have a pan pot, another basic, but useful control. Channel select button allow you move through your tracks and used with the "bank" button, you can move 8 tracks forward or back - a small function, but again, one that I really like. With the Reaper hack, the pan  pot can also do other things - I won't bother listing those here just yet as I've only just got the thing and I'm still cruising through the cool features.

It has coloured back-lit buttons and something I like that's really simple but so good - a solid click when you press the buttons. Not everyone's cup of tea, but personally, I really like that. 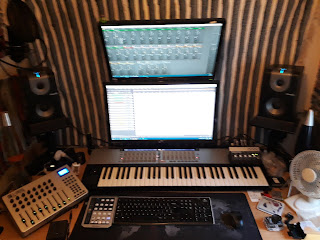 The afore-mentioned motorised fader (swoon!!!) is very smooth and very responsive, I messed about moving the fader on some random tracks and found the movement to be top notch, and so important when automating volume levels.

PreSonus also do 8-channel and 16-channel versions - much as I would love either, they would be too big for my desktop, and that's the point I'm making, the Faderport is small but not in anyway does that affect it's operation or ease of use.

As I said earlier, I'm 4 hours in with the PreSonus Faderport and I'm a big fan already.

Best buy this year so far - I love it. 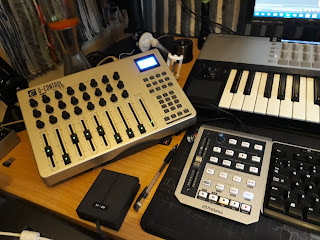